Using Tyler, The Creator’s ‘IGOR’ to Guide Your Buyer’s Journey

Tyler, the Creator’s fifth studio album, IGOR, was delivered to the world as an entry point into a sophisticated universe. It was a project with enough depth to spark internet deep-dives for answers to motifs and symbols. But beyond its creative significance, Tyler was also able to seamlessly weave in concepts often relegated to start-up culture.

The rollout behind IGOR exemplified the music industry’s parallel of a well-executed buyer’s journey. Tyler’s streamlined approach prompted Stem to develop a birds-eye analysis to help you understand how to lead consumers through an effective buyer’s journey and boost revenues for your merchandise, albums, and other points of sale.

Note: This is a Stem-produced analysis and not an official report.

START WITH A CREATIVE BASIS

Once you’ve laid out the creative concept behind your album, aim to extract three to five elements from that universe to develop into the core pillars people can easily associate with your project. These pillars should be easily digestible artistic details that will serve as marketing tools to help walk consumers through the buyer’s journey you’re creating.

For the sake of this article’s analysis, the core pillars that were built out of IGOR’s creative concept were:

PROVIDE CONSUMERS WITH AN OFFICIAL INVITATION

IGOR’s rollout kicked off with a set of four 1-minute teasers.

Looking closely, you’ll notice the introduction of the core pillars. Their presentation within the teasers sparks intrigue, thus, inviting consumers into a story unfolding in real-time. (We would find out later that these teasers were clips pulled directly from a handful of official music videos).

When structuring your journey, think about how you can kick off your rollout using your pillars to spark fan interest. Whatever creative mediums you use should put your pillars at the forefront since they will serve as the “hook” of your journey meant to draw consumers in.

AMPLIFY YOUR OFFERINGS WITH A CUSTOMIZED SOCIAL PRESENCE

During your rollout, your platforms should showcase as many dimensions of your universe as possible. This is the stage of the buyer’s journey where you immerse your fans and convince them to buy-in to what you have going on.

Tyler’s main Instagram account (@feliciathegoat) included a variety of unorthodox multimedia during the IGOR rollout. But the presiding purpose of his account was to serve as a vessel to let fans know that his favorite project in his discography to date had been released. Though most posts were promotional, the approach still felt organic. 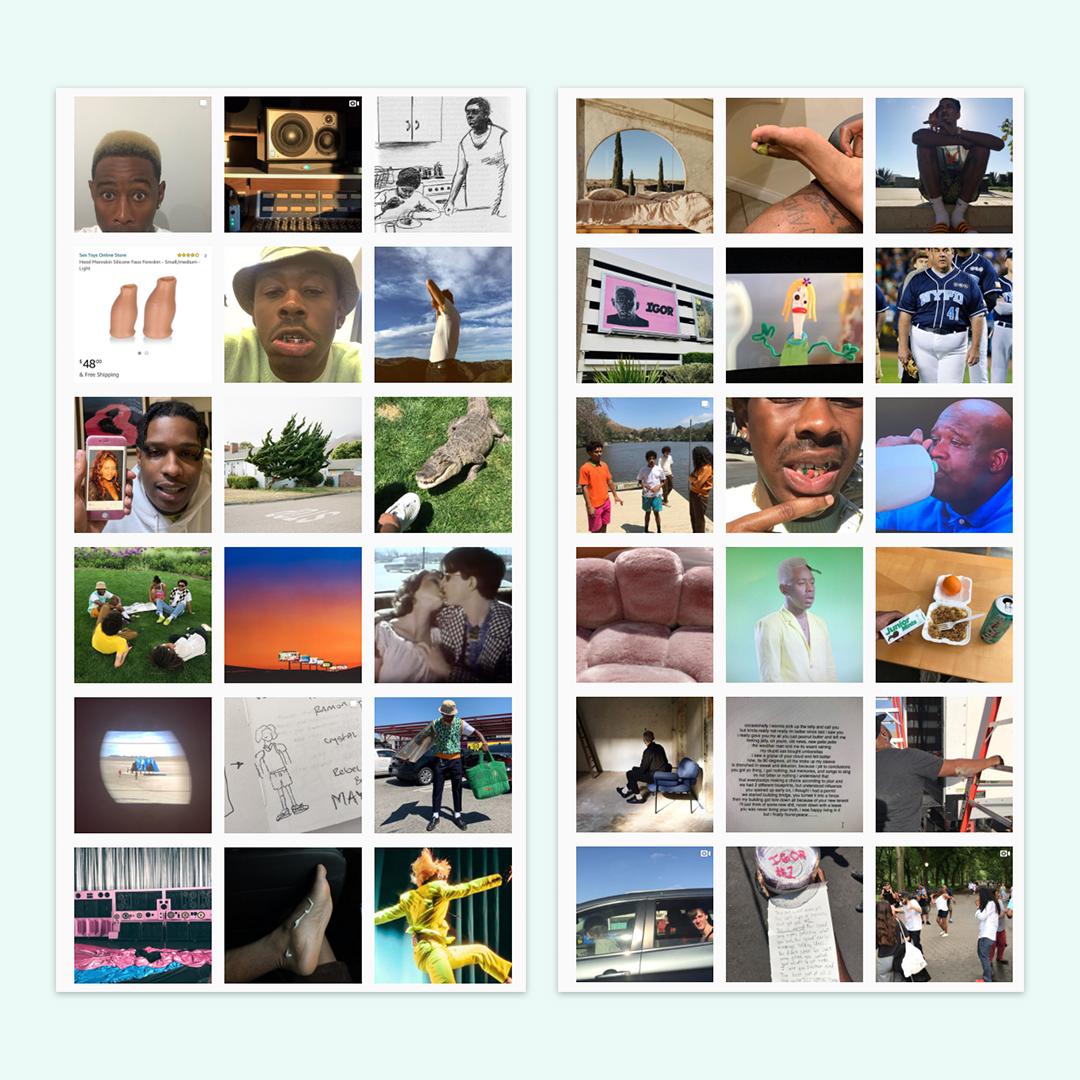 This part of the journey should help you stay top of mind. Using as many of the features within an app to customize your feed will continue to lead consumers through a consistent storyline. Also, use this as a digital advertisement to post your core pillars.

Tyler’s Twitter presence in the days following the IGOR release was a flurry of excitement, unabashed love of self, and a deep appreciation for all the recognition he’d been receiving.

This touchpoint was able to achieve a similar outcome as Tyler’s second Instagram account, @scumfuckflowerboy by providing fans with a feeling of intimacy and personal connection with his unorthodox but artistic output. While the universe of IGOR felt larger than life, Tyler involved and engaged with his fanbase on Twitter, often on an individual basis.

CONVERT AT YOUR POINTS OF SALE

By this point, Tyler had introduced his core pillars in a way that galvanized his fan base and generated attention from around the industry. He sustained the energy through digital presences to stay in front of those who had fully immersed themselves in the IGOR’s universe.

From there, IGOR’s merchandise items were a culmination of the consistent throughlines fans had been following since the beginning of the rollout. There was no disconnect between purchasable items and the artistic concepts they fell in love with.

Because fans had been through such an engaging journey, they were even more likely to commit financially. Being able to claim a tangible relic gave fans a way to physically live within the IGOR universe themselves, beyond just hearing and seeing it from their phones.

When developing your points of sale, build out as many purchasable items that stem from your core pillars. By now, the journey you’ve developed will have fully immersed consumers into your universe, positively impacting conversion rates for your merchandise.

Download the full playbook to Inspiring your Buyer’s Journey below!