Jessie Reyez’s debut album, Before Love Came To Kill Us, was predicted to sell 15,000 units its first week. But the savvy business and marketing strategies implemented by co-manager Mauricio Ruiz and his team nearly doubled those projections.

Within a week, everyone in the music industry was forced to sharpen their digital efforts if they wanted to thrive. But Mauricio and his crew had the upper-hand. His background in film intuitively led him to push his team to invest heavily in digital content to compensate for the loss of exposure that would have come from live performances.

Mauricio admits that his artist’s success wasn’t fully contingent on executing calculated strategies. Instead, his team focused on working with the elements in front of them and took advantage of serendipitous alignments that presented themselves. Though no journey comes with a blueprint, Stem spoke with Mauricio to break down the approach they used to boost his artist’s first week sales, brand equity, and earning potential.

HOW TO DEVELOP & MONETIZE YOUR ARTIST’S BRAND

Over the past decade, Toronto’s hometown heroes like The Weeknd and PartyNextDoor perfected the ever-alluring, “let the music speak for itself” aesthetic. Years before her debut hit digital shelves, Jessie found herself tempted to lean into a similar lane. However, Mauricio suggested a different approach:

“I said, ‘I think we have to do the exact opposite. You have to be out there, and you need to be vocal. You’re an intelligent, beautiful woman. Go in that direction and be authentically who you are, even if it’s polarizing.’”

To develop the core values of Jessie’s brand, Mauricio and his team first identified who she wasn’t. They made a conscious effort to use her Canadian and Colombian upbringing as a point of departure rather than play into a popular regional trend at the time.

Next, they honed in on elements of Jessie’s everyday lifestyle that would resonate with a wide audience organically. The team centered her brand around her willingness to speak her mind and her past experiences coming up in the music industry as a woman.

One of the first brand deals Jessie entered into was with popular Canadian clothing brand Roots Canada in 2017. 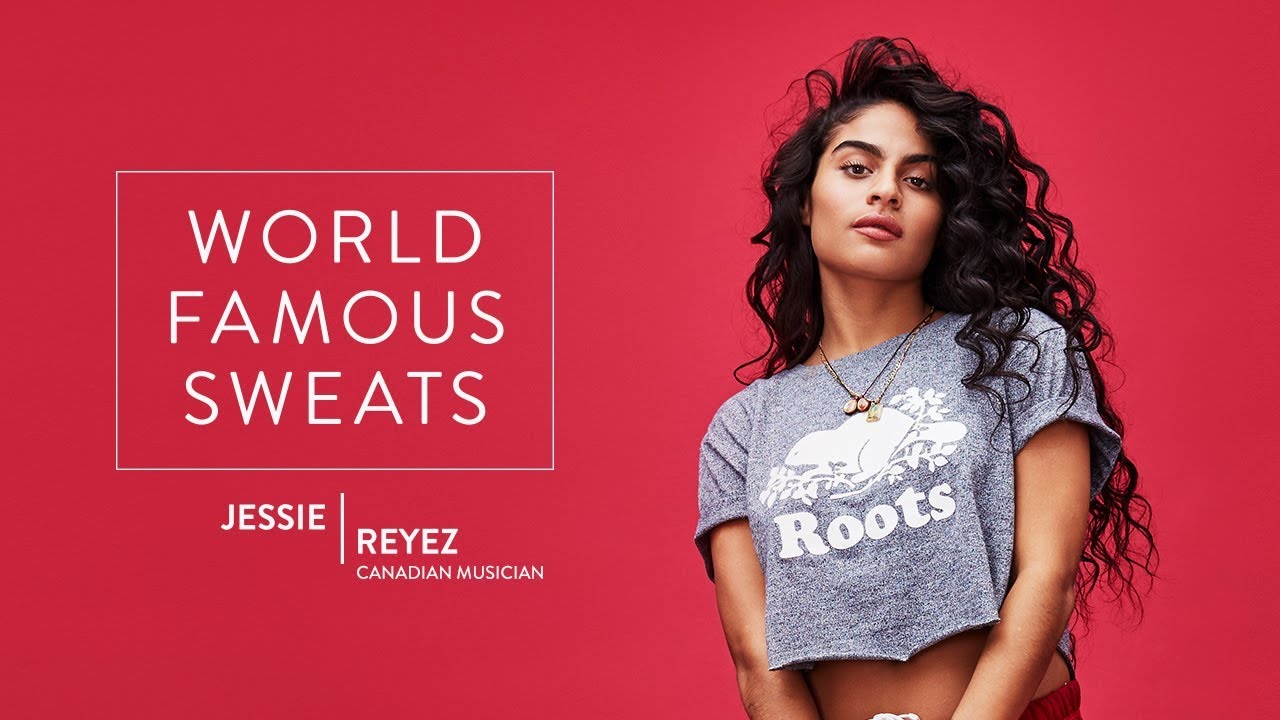 “There were no dollars attached to it, but there was a lot of out-of-home marketing that gave us a good look for Jessie,” Mauricio said. “She and Daniel Caesar were the main artists on that campaign.”

Even if your artist has a growing profile that demands a fee, sometimes it’s best to forgo an immediate boost in the bottom line for immeasurable returns in the future. Still, find a healthy balance between remaining authentic without pigeonholing them into a niche that may limit future endorsements or cause oversaturation.

Jessie’s brand is a real-time example of everyday life dictating business. Her participation in a campaign with Secret Deodorant allowed her to tell her story of adversity and triumph as a woman in the music industry, while her affinity for Jameson’s merchandise and products projected a casual aesthetic.

III. Sticking to the Brand Narrative

From that, Jessie and her team developed a tangible narrative: a powerful woman from Canada who isn’t afraid to take a quick shot of whiskey before baring her soul in front of thousands.

“It was more about the message that was going to be put out into the world. Jessie’s very woman-empowerment focused, so she wanted to tell her story about her experiences in the music industry, what adversities she’s had to overcome, and we had the platform to deliver that message. All her fans were excited about it because she’s in this massive national campaign.” 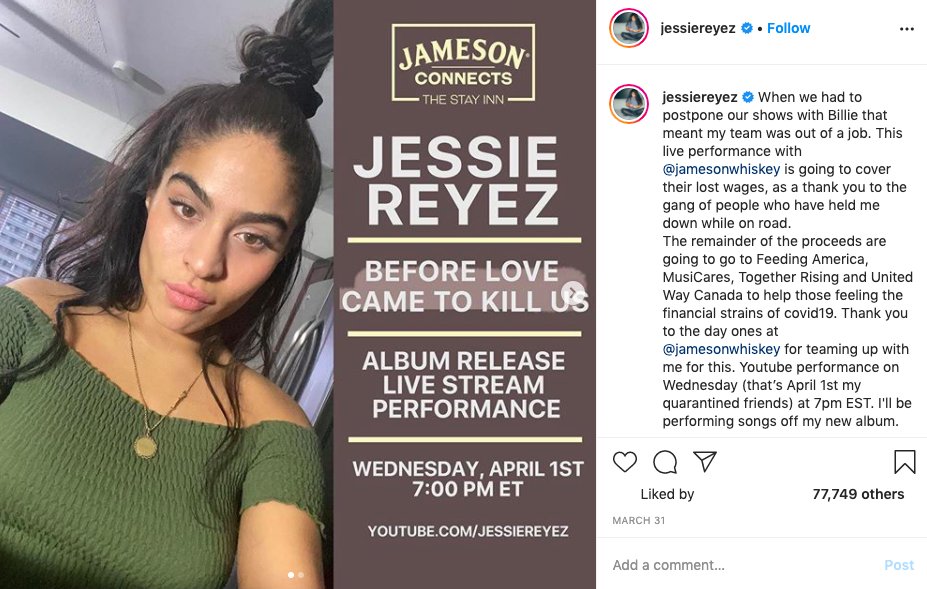 “She was rocking Jameson sweaters and putting Jameson on her rider for a year before we ever did anything with them. They caught wind of it, we did a deal for a live event, and it was great. We still work with them to this day.”

On the third day as the opening act for Billie Eilish’s Where Do We Go? tour, everyone was forced to go home due to the growing threat of COVID-19.

Though Jessie’s debut was due to hit DSPs during the whirlwind of distressing news reports and immediate country-wide shutdowns, the team decided not to delay the release March 27 date. Their original promotion strategy consisted of late-night TV slots, a Coachella performance, and four tours over 19 weeks – including opening on Billie Eilish’s North American tour, a solo European tour, a solo American tour, and the opening slot on Billie’s European leg.

To make up for the massive dip in in-person exposure, the team reshifted their focus to executing two digital efforts and refining their social media approach.

“We saw a bunch of reaction videos that came from people searching ‘Eminem and Jessie Reyez.’ They were reacting to the song they have because it’s Eminem and he’s a lyrical guy, so a lot of people are going to pay attention. But when the reactors are listening to the song, they’re like, ‘Jessie goes hard, I’ve never really heard of her.‘” 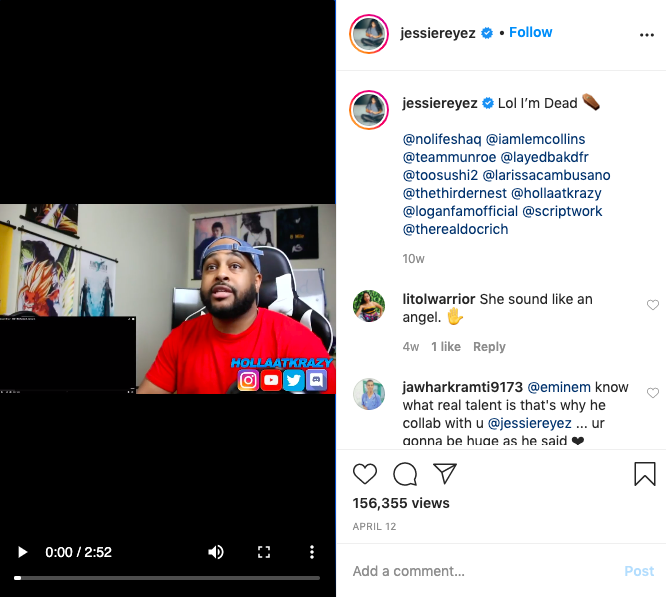 According to Mauricio, the team had been filming pre and post-release content and music videos since 2019. In addition to their own efforts, they proactively searched for existing user-generated content to repurpose, and made it a point to broadcast her deep appreciation for the creators.

1. Compile all the reaction videos from notable reactors into one video

2. Upload the compilation video on IGTV and YouTube only

3. Mention each reactor in the caption

“What we realized is a lot of reactors never get the shoutouts from the artist, so it was very new for them. It was like a thank you. Some of those reactors ended up reacting to the reaction video we put together.”

“We had a piece of content where Jessie’s singing “Coffin” in a botanical garden. That came out six weeks after the album, but the engagement was massive. If you’re on the fence about her music, but you see or hear her perform live, you’ll say, ‘This girl’s the s***.’ That reinforces the idea that people need to see her live. So, how are we going to do that in a world where you can’t see her physically? Put out more live content we have in the bag. We weren’t going to put it on Spotify, but after [seeing the engagement,] the conversation turned into us putting it on all the DSPs.”

You never know how far a piece of content may go. When you begin to notice a video or audio clip surge in engagement, ask yourself what other mediums can support this content that will extend your promotion efforts. Keep in mind, though, that the same piece of content should not go on every platform.

1. It limits the chances of fatiguing her audience with too much cross-promotion.

Gary Vee’s jab, jab, right hook – “Give, give, give, even if it’s just an interaction. On Jessie’s texting platform, she will do a lot of direct messaging, wishing people a happy birthday. That goes a long way. If people don’t believe it’s Jessie, she’ll send a video. That one-on-one engagement, which doesn’t take a long time, is valuable. That’s currency, and that translates into loyal fanbases.”

Always look ahead – “A focus for me has been looking into gaming [and understanding] how we can figure out that market and figure out a way to make it work in a way that’s authentic to Jessie.”

Focus on stretching momentum – “If it feels like things are slowing down, which they do, you have to keep pushing and looking at the evidence that’s raising its hands. What’s the market in the U.K. doing? What’s Turkey saying? [For example, if our data shows] something is happening in Brazil, let’s feed them a specific type of content with digital ads.”